Getting Started with Git

Git is a free and opensource distributed version control system designed to handle everything from small to very large projects with speed and efficiency. While working with Git I often get asked questions about best practices or the more advanced usage of Git e.g.: a rebase, merge conflict or how to cherry pick. This post will serve as my personal Git reference as well as a getting started guide for my colleagues and friends.

Keep in mind that I am absolutely no wizard in the area of Git, so improvements, feedback and additions to this post are always welcome! In the near future this blog will be expanded considerably, but I will also try to make regular updates after that.

Before we dive into Git, lets take a quick look at the terminology.

Within Git your files can reside in three states: modified, staged and commited. In the modified state, files have been changed but aren’t committed to the Git database yet. In the staging state, changed files are marked in there current version to be added to the next commit snapshot. In the last commited state, the commits are stored in the local Git database.

An example of a typical Git workflow using the specified stages:

When a project in checked out in the working directory, the files at a specific moment in time are pulled out of the Git database and placed in the Git directory to be modified. When a user has made some changes to the files, they can be staged to the next commit in the staging area. Within the Git terminology the staging area is known as the index. When a commit is made, the changes that where staged, will be saved to the Git database.

After installing Git you might want to customize your Git environment using the git config command. There are three places where the configuration can be stored:

Every commit in Git contains information about the author, therefore we want to start by configuring our username and email address using the following commands:

The --global option indicates that we want to store the configuration in the ~/.gitconfig or ~/.config/git/config file. If you want to overwrite these option on a specific repository, you can simply omit the --global option while executing the above commands from within the directory of your local repository.

By default Git will use your system’s default text editor. To choose a different text editor you can run the following command which will set vim as the editor when something needs to be typed in Git (e.g. Git commit message):

Using the git config --list command you can list your current Git configuration. To show a specific setting, you can for example invoke the git config user.name command which will only show the configured username.

Git comes packed with detailed manpages (manual pages) which can be read by invoking the following commands:

To show the manpages for the git commit run the following command for example:

If you are only looking for an overview of the available options, simply append the the Git command the the -h flag, e.g.: git commit -h.

Besides the manpages for all the Git commands you will find the following guide to be very useful:

After Git has been set up, we are ready to start using Git the way it was intended. In this chapter we will cover most of the basic commands, by the end you should have enough knowledge about Git to start working on actual Git repositories.

Getting a Git Repository

Turn a Local Directory into a Repository

If you want to start controlling a directory with Git you can use the git init command the initialize the Git repository:

This creates the .git directory containing all the information about your newly created repository. At the start of a new repository nothing is tracked yet, if you want to start tracking existing files you can create an initial commit. First add the files to the Git index using the git add command, followed by a git commit:

In addition to creating new repositories you can also clone existing one using the git clone <url> command. This allows you to get a local copy of the repositories on GitHub or GitLab for example. Where the git checkout command will just get a working copy, the git clone command receives a full copy of nearly all data that is known on the remote repository you’re cloning.

To clone this blog for example (also a Git repository), you can run the following command to receive a full copy:

This will create a directory called roaldnefs.com in the current working directory. In order to specify a target directory use the following command:

Besides the https:// protocol you can also use the git:// or SSH protocol to clone a repository.

Recording Changes to the Repository

After creating or cloning a repository you have a local copy of the project. In most cases you want to start making changes to the project and commit them to the repository so that each change is recorded as a snapshot of the repository.

Within the repository files can reside in two states: tracked or untracked. After cloning an existing repository all files are tracked, the moment you edit the file they become untracked. If a file has changed, (re)moved or renamed it become modified compared to the last commit. Those changes can be staged in the Git index to be added to the next commit. The lifecycle of files within the Git repository looks like this:

The paragraphs below will further explain the files states.

The git status command is used to determine state state of all the files in your Git repository. Directly after cloning a new repository the output will look similar to this:

Using the -s flag we can also show a shorter status report:

To start tracking any new files using Git, we can use the git add command which will track and add the changes to be staged for the next commit. To track the newly created README file, run the following command:

The git status command will now list the file as being staged:

Besides adding new files to the Git index we can also stage modified files using the git add command. After modifying the existing config.yaml file the git status report shows the following content:

If you modify the config.yaml after staging it, it will be listed in both the tracked and untracked section of the git status report:

If you would create a commit at this point, only the last set of changes (tracked) would be added to the commit. Use the git add config.yaml command again to also stage your newly created changes.

You don’t always want Git to track all files in a directory. If you are working on a Python project you probably want Git to ignore the byte source files (*.pyc). That’s possible using the .gitignore file, any matched pattern in this file will be ignored be Git. Below you will find an example for Python projects:

GitHub maintains a Git project including the .gitignore files for the most common languages and frameworks on: github.com/github/gitignore.

The git status command only lists the changed files, if you als want to know what has been changed in the file contents then you can use the git diff command. The git diff command will show the exact lines that have been updated, added or removed. The example below will show the line “This is a new line in the README file!” being added as the first line in the README file:

At this moment we are able to stage our changes for the next commit, to create the actual commit we can use the git commit command. When executed only the staged changes will be added to the commit. The simplest way te create a commit is using the git commit command itself. This will launch the editor of your choice (see First-Time Git Setup):

Your editor will display the following text:

After creating the commit the git commit command will show you the branch (master) you commited to, the SHA-1 checksum (4c822a3), the number of changed files, and statistics about the lines added and removed in the commit.

The image below shows four commits being created on the master branch: 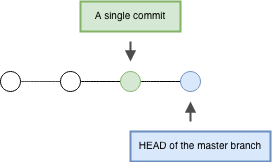 If you already staged a change for a file you actual like to remove, you will have to use the -f option to force the deletion:

Git doesn’t always automatically track file movement. If your want to rename or move a file you can use the git mv command:

Make sure to read the next post in the Git series about Git Braching.